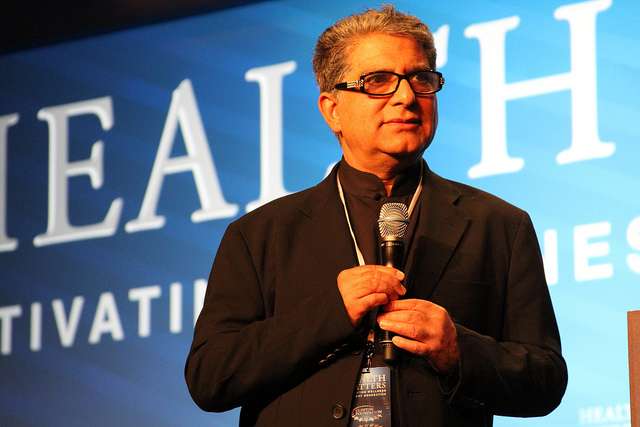 Posted at 15:54h in Blog, Mindfulness by Jennifer
It takes special people to create change — people who look at the traditional methods of doing things and wonder if there isn’t a bettter way. These are the folks who don’t follow the pack, who don’t subscribe to the same theories that everybody else does. The people on this list are all people who fit that description and as a result, they have become the wellness gamechangers, inspiring not only the general public but other wellness providers, such as myself.

You probably know Deepak Chopra from his many appearances on the Oprah Winfrey Show. Like Dr. Phil, Suze Orman and Dr. Oz, Deepak Chopra was one of a handful of gurus Oprah introduced us to, and she still works with him today. (See this article for their latest venture together.)

Chopra is one of the leading practitioners of alternative medicine, a field he became interested in after losing faith in traditional medicine. According to biography.com, he left his job at a hospital after meeting Maharishi Mahesh Yogi, a transcendental mediation guru, and started his own alternative medicine business with the Maharashi, selling products such as teas and oils. From there, he moved on to creating clinics to better serve the public, ultimately opening the Chopra Center for Well Being in California. He became an immensely successful author, bringing his message to the masses with over 50 books, including the New York Times bestsellers Reinventing the Body, Resurrecting the Soul: How to Create a New You and Ageless Body, Timeless Mind.

Deepak Chopra taught us to look at health and happiness in a whole new way. As biography.com puts it, “Chopra’s core mesage centers around the idea that the decadence of Western life leads to a complicated reliance on a material world to find happiness.” So what we think makes us happy doesn’t really make us happy. Chopra also believes that the mind and the power of meditation can heal the body; that a mindful approach to life is a guiding path to happiness; and that it is vital to establish a connection between body and soul. He looks beyond healing symptoms with medicine and takes a more encompassing mind/body approach to wellness.

Sue Shepherd is an Advanced Accredited Practicing Dietitian and Accredited Nutritionist, who works with folks suffering from food-based allergies. In 1999, Sue Shepherd created the FODMAP diet, which helps ease the symptoms of Irritable Bowel Syndrome (IBS). FODMAPs are Fermentable Oligosaccharides, Disaccharides, Monosaccharides and Polyols, “complex names for a collection of molecules found in food, that can be poorly absorbed by some people,” explains Shepherd’s site. FODMAPs are found in a wide variety of foods, like artichokes, mangoes, milk and baked beans. Shepherd’s diet allows people to try to treat their IBS naturally, rather than resorting to medications, if they are not needed. For her research efforts, she received the Gastroenterological Society of Australia’s Young Investigator of the Year Award in 2006. Shepherd, who suffers from celiac disease herself, has written numerous cookbooks, including Gluten Free Cooking, and has even created a range of food products for those with IBS. She gives hope to those with food allergies that they can still treat their symptoms without sacrificing the foods they love.

Pilates may seem like a new trend, but its roots go back over a century. Its creator Joseph Hubertus Pilates was born in 1883, and looked to exercise and sports as a way to heal his various illnesses, including asthma. In the 20s, Joseph came to America and opened a studio. Decades later, Pilates caught on with the NYC Ballet, and by the 70s, it was the latest thing among celebrities. Pilates is a form of exercise that strengthens the body, particularly the core, and can be used by various people for various reasons. In addition to dancers using it in their field, athletes also use Pilates to train better and it is used medically by people who need to recover from physical ailments, for instance back pain. As back pain frequently requires medicine or suergery, Pilates is an all-natural option for back pain sufferers to have in their toolbox.

The Omnivore’s Dilemma by Michael Pollan is a revolutionary work that has turned its author into one of our most highly recognized food activists. In our busy lives, we often grab food that is the most convenient, but are we making the healthiest decision? What do we know about our food and where it comes from? Pollan encourages readers to understand how their food is made and what it is made of. A Chicken McNugget, which we would imagine to be almost all chicken, is actually made up largely of corn, says Pollan. Even milkshakes and sodas from McDonald’s are made partially from corn. Pollan questions the food pyramid, made up by the government, and Atkins, which discourages carbs. The “omnivore’s dilemma” is this: While we as omnivores can eat everything we want, does that mean we should? How do we decide what to eat? Pollan has a back-to-nature philosophy, encouraging us to eat foods with ingredients that are easy to understand, that our grandparents would have recognized. The problem with today’s foods, he explains, boils down to the problems with the industrial food chain, which gives the public an end product (say, Twinkies) that doesn’t resemble what it has been made of (corn). Pollan believes that once people understand where their food comes from, it will allow them to enjoy it more. His latest project is Cooked, a documentary series you can catch right now on Netflix.

David Katz is a medical educator, professor and the author of 200 articles and over 10 books, including Disease-Proof: The Remarkable Truth About What Makes Us Well. In that book, Katz investigates the link between chronic disease and behavior — specifically not smoking, eating healthy, exercising and maintaining a healthy weight for our bodies. When someone does these four things, Katz says, it leads to an 80% lower risk in chronic diseases such as cancer, heart disease and diabetes. Katz focuses on the preventative actions we can take to be healthy rather than ways to cure diseases once we have them. It would seem like a no-brainer way of thinking, but think about how often your doctor counsels you on nutrition or exercise. His Flavor Point Diet also discourages denial and restriction, and encourages readers to use their tastebuds as a guide.

It is impossible to quantify the impact these five individuals have had in the field of wellness. Definitely check out their books and their websites to see how their philosophies might help you with whatever health or healing challenges you face.

Self-Care Sunday: Why Women’s Health Magazines are Changing Their Tune